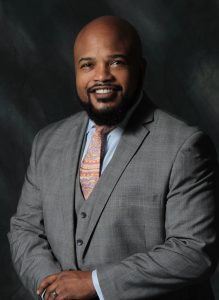 Vincent E. James, Sr. began his journey with Christ at an early age and grew as a child in the Lampton Baptist Church.  He graduated from the Jefferson County Public School System and continued his education at the University of Louisville, obtaining a degree in Finance.  Following graduation, he attended the Southern Baptist Theological Seminary.
At the age of 21, while at the University of Louisville, Vincent acknowledged his call to the preaching ministry and became a licensed Minister of the Gospel.  Also during this time, another blessing came Rev. James’s way, in the person of Jo Ann Childs.  They met and married and have enjoyed 23 years together.  Three grown children complete their union, Joey, Vincent Jr., and Carol.

Pastor was on the fast track in his career with the General Electric Company when God called him to move from Licensed Minister to Pastor. In November of 1995, Rev. James became a bi-vocational Pastor of the Elim Baptist Church in Louisville, Kentucky.  Three years later, God called the James Family to another Abraham transition, leaving the security of a lucrative career to commit to the full-time pastorate.  Elim is truly an oasis in the desert, and under the leadership of Pastor James, the church is growing both in spiritual maturity and membership. Pastor and Lady James have been faithful servant leaders at Elim for 16 years.  He leads the congregation through compelling and challenging messages, encouraging and edifying the people to commit to the mission that “every member be a maturing member,” excited about salvation and motivated to share the Gospel.

Pastor James has used his business experience, covered by the Holy Spirit, to develop a powerful Leadership Team to engage the congregation, community and city in activities that support their spiritual growth and utilize their gifts and talents.  God is definitely doing a new thing at Elim.  Elim’s Vision is to be “a Christian oasis within the community that transforms the community.”  The church mission is to “make disciples to make a difference.”

Pastor James is a child of God, saved and passionate about Jesus Christ and His service.   Through it all, with an Abraham spirit, Pastor Vincent E. James, Sr., is moving, “on tiptoes of anticipation, expecting God to do something awesome in the lives of His people through the power of Jesus Christ and His Holy Spirit.” 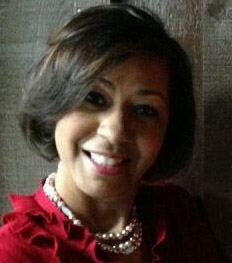 JoAnn James is a multi-faceted woman with a treasure trove of talents. The list of her educational, professional and personal accomplishments is both long and impressive. In an attempt to be brief – out of the plethora of words that can be used to describe JoAnn, a fitting encapsulation of her talents can be found in the two-word title of her profession, as well as in her maiden name.

Mrs. James is a native of Shelbyville, Kentucky. She attended the Shelby County Public School System and a graduate of Kentucky State University, where she received a Bachelors of Arts in Social Science, and a Masters of Social Science. JoAnn has also acquired countless amount of training in the field of Social Work at Indiana University, where she has obtained Rank 1 in Education.

Anyone who has had the pleasure of being in her presence for more than a minute knows that she is a social being with a free and loving spirit. JoAnn has truly never met a stranger. Also, those who know JoAnn can attest to the fact that she is an extremely hard worker. She will do whatever it takes to get the job done no matter how daunting or menial the task. She has conjoined her love of people with her untiring work ethic to excel in her professional career at the Jefferson County Public School System. She retired in 2018 after 30 years but hasn’t slowed down one bit as she continues to pour herself into her service as First Lady of Elim Baptist Church where her husband Reverend Vincent E. James, Sr. is Pastor.

JoAnn’s maiden name is Childs. In her role as a social worker, Mrs. James always placed a priority and a premium on protecting children and families. She recognizes the importance of such advocacy as a proud mother of three adult children Joey, Vincent Jr., and a beautiful daughter Carol. But, probably the best and most fitting description of JoAnn James is that she is first and foremost a child of God.

JoAnn is also a member of the following but not limited to:

JoAnn believes in the scripture Romans 8:28 “And we know in all things, God works for the good of those who love him, who have been called according to this purpose.” She holds this scripture dear to heart, and uses it daily to keep her grounded as she encounters life’s challenges and blessings.

Get Updates And Stay Connected -Subscribe To Our Newsletter